I have been trying to write this blog addressing the yellow wheat for about two weeks now. But with finally finding a dry”ish” day or two and a lot of calls and emails about yellow wheat, I am just now getting to it.
So the short story is there is a lot of wheat out there in the state that is show signs of chlorosis, or yellowing. I wish I could say I have all the answers for you in this article, but I will have to lay heavily upon the agronomist best answer, “Well it Depends.”.

Cow pox showing up in a wheat field in Kay County.

First we will start with the things I know least about and then move on to things that are more in my wheelhouse. In the last two weeks I have been on multiple email strings trying to chase down the cause of chlorosis in fields all over the state.  One of these included Dr. Bob Hunger and the Plant Disease & Insect Diag Lab (PDIDL) and in one field his final thought was “So, my best guess is cold and wet soils along with fungi colonizing the older leaves that are starting to senesce.” At the same time I am finding regular occurrence of Tan Spot and Leaf Rust increase. All these pathogen cause some level of chlorosis and if you do not get down and pull some samples you will never know the cause.

Originally thought to be leaf rust, but corrected by Dr. Hunger who suggested it is early stages of striped rust, found in Stillwater Oklahoma 3.27.2020.

A new for me this year is what I am calling the herbicide ding. I was able to get over a lot of my wheat that first week of March with a shot of herbicide, everything was almost to hollowstem. The wheat really got dinged. Very visual yellowing and stunting of the plants. Talking with Dr Manucheri, she had seen the same thing in her plots in Tipton. I have also visited several farmer fields with the same symptoms. Dr. Manucheri shared with me the Finesse label. Directly from the label “Temporary discolorations and/or crop injury may occur if herbicide is applied when the crop is stressed by severe weather conditions (such as heavy rainfall, prolonged cold weather, or wide fluctuations in day/night temps), disease or insect damage, low fertility, applications to course soils, or when applied in combination with surfactant and high rates of liquid fertilizer solutions.” This can be found on page 5, http://www.cdms.net/ldat/ldFSL002.pdf . You can just about mark off every weather and application condition mentions, on the same field. 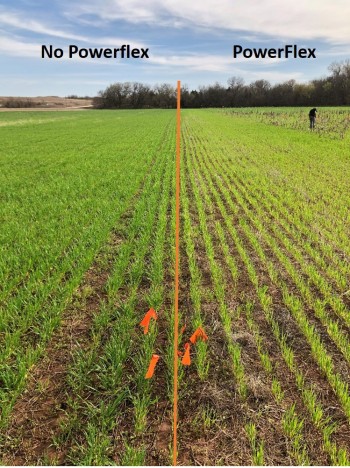 Image collected 3.25.20. The right side was treated with Powerflex on 3.5.20. The left side was not treated so that sorghum could be planted in April.

Now to the yellow wheat I can comfortably talk about. There is nitrogen deficiencies out there. That should not come as a shock with the amount of rain we have received over the last couple months. I also believe that a fair amount of the wheat crop out there is a bit lacking on roots department.

The overarching wet cools soils that we have more than likely have led to reduced root exploration in some areas. And if you combine short roots with a nitrate leaching then the probability of N being out of the reach of the crop is high. Then the question is “Is there still time to do anything?”. The trip I look over the weekend (3/28, 3/29) that encompassed a great deal of the North Central Ok wheat belt showed me that the majority of the wheat had really progressed physiologically in the last two weeks. At this point, a positive return on N investment hinges on the stage the wheat is at.

Our delayed N work over the past several years show that we have maintained the yield on our trials even when fertilizer was delayed into the first week of April. https://osunpk.com/2019/08/14/how-long-can-wheat-wait-for-nitrogen-one-more-year-of-data/

Each graph is from a location where the delayed N study was preformed. The objective of our study was to determine the impact of prolonged nitrogen deficiency on winter wheat grain yield and protein. Eight studies were conducted with 11 N application timings in no-till dryland conditions. A pre-plant treatment of 90 lbs ac-1 of N was broadcast applied as ammonium nitrate (AN). We used AN as our source because we wanted to measure the crops ability to recover and eliminate the impact of source efficiencies. When visual symptom differentiation (VSD) was documented between the pre-plant and the non-fertilized check, i.e the N-Rich Strip showed up, top-dress applications were performed every seven growth days (GDD> 0) (https://www.mesonet.org/index.php) until 63 growth days after VSD at all sites. The only N the treatments received where applied according to treatment structure. No pre-plant N was applied on the trials other than the Pre-plant treatment.

This table shows the application dates of the 10 site years of the delayed nitrogen study. The first column is the location, to the right of the location is two rows the top is grain yield and the bottom is grain protein. Each of the following columns corresponds to an application date. Applications began at each study when the The colors are related to whether that application was statistically (Alpha=0.05) worse than, equal too, or better than applying nitrogen at the first sign of deficiency (0DAVD). For this comparison it is important to know that at no location did preplant have significantly greater yield than 0DAVD.In the majority of those years that first week of April corresponded with the growth stage  Feekes 8, last leaf just visible. As the crop moves beyond that point, catching up did not happen. Currently there is wheat out there in the state that has not hit hollow stem (Feekes 6) and there is wheat at Flag leaf (Feekes 9).

The Feekes Scale focused in on the stem extension growth phase. The period extends from hollow-stem (Feekes 6) to boot (Feekes 10).

The high rainfall totals we have could have also led to another deficiency sulfur. In the past S deficiency is fairly hard to find in Oklahoma. Our long history of low S using winter wheat and high sub-soil S levels have kept the response to Sulfur low, but not uncommon. Sulfur is a mobile nutrient and will also be lost via leaching especially in sandy soils in the northern part of the state. Sulfur deficient is different from N in that it shows in the newer growth as a general yellowing of crop. Kansas State has a lot of great resources on sulfur management in wheat.  https://webapp.agron.ksu.edu/agr_social/m_eu_article.throck?article_id=2132

If your wheat is yellow and before you call the fertilizer applicator, first confirm it is nitrogen and or sulfur and not something else. A key point to nitrogen deficiency is that the cholorsis will be worst on the oldest leafs while new growth is green. If N deficiency is confirmed then figure out how far along your wheat is. If the crop is around hollow stem to Feekes 8,  if you can get the N on soon there is a good chance to get your money back plus. Keep in mind with air temps above 60 degrees UAN will burn the tissue so it is best to use streamer nozzles, which will still burn but the tissue damage is lessened. If you do not have access to streamers you can dilute the UAN with water and use flat fan nozzles. Cutting the UAN with water reduce the impact of leaf burn, I typically recommend at least 2 part UAN to 1 part water, but a 1 to 1 is the safest. 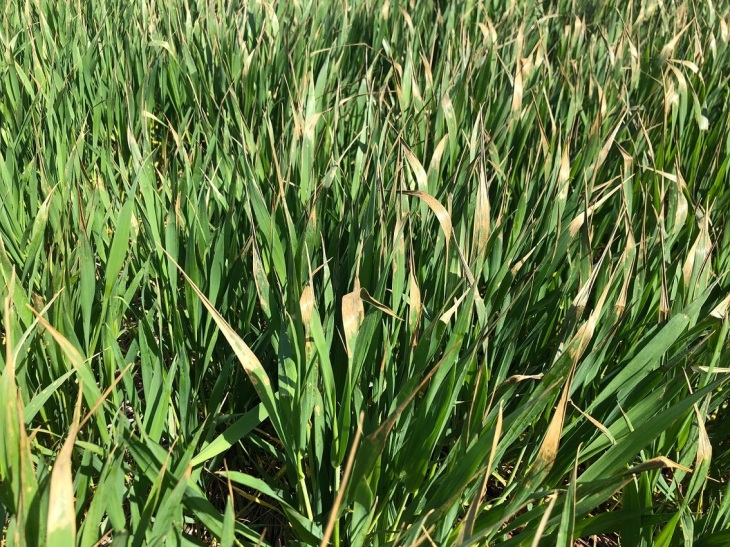 Image of wheat with forage burn from UAN applied with streamer nozzles. Application was made two days prior with air temps where above 80 degrees.

By osunpk in Fertilizer, Wheat on March 31, 2020.
← On Farm Nitrogen Rate Study Results 18-19. Value of in-season application for grain only wheat production. →