Value of in-season application for grain only wheat production.

Historically winter wheat producers have utilized pre-plant nitrogen (N) fertilizer application due to efficiency of time and the lower cost of the primary N source, anhydrous ammonia. However, as the growing cycle of winter wheat is approximately 9 months long with only 80% of the total N accumulation reached by flowering.  Research as shown that N applied prior to planting is more likely to be lost due to leaching or denitrification. Researchers at Oklahoma State University have invested significant efforts in evaluating N management strategies. This blog will present the data from multiple trials which allowed for the comparison of nitrogen applied pre-plant versus in-season. The trials were conducted over a four-year period at multiple locations across central Oklahoma.

Delayed Nitrogen – NH4NO3
This study was started in the fall of 2016 and concluded with the 2020 wheat harvest. In all, twelve trials were established and achieved maturity. This study was designed to evaluate the recovery of winter wheat grain yield and protein after the crop was N stressed. Treatments included an untreated check, pre-plant application and ten in-season treatments. The application of in-season treatments was initiated when N deficiency was confirmed and treatments were applied in progressive order every seven growing days to the point of 63 growing days after visual deficiency (DAVD). A growing degree days is any day that the average daily temperature is at or above 40⁰ F.  Ammonium nitrate (NH4NO3) was applied at a rate of 90 lbs N ac-1 for all treatments.

Nitrogen response was observed at eleven of the twelve locations, and those sites will be the focus of this review. Nitrogen applications were started ranging from Nov. 10th to Mar. 7th for 0 DAVD and, concluded with 63 DAVD occurring between mid-February and early-May. The analysis of the data evaluated the yield and protein of the in-season applications compared to both the pre-plant application and the application made at the first sign of N deficiency, 0DAVD.

Across the eleven responsive years, the pre-plant application never outperformed the 0DAVD in terms of grain yield or protein. In fact, across all location if the in-season application was made prior to the end of March, the yield and protein was equal to or better than pre-plant applications. Four out of elevens sites, yield was significantly improved with in-season applications, and protein was improved in ten out of eleven locations. For the ten site/years that had applications in March, the mid-March application of 90 lbs of N, which is about the stage of hollow stem (Feekes 6), statistically increased yield four times and protein nine times compared to the pre-plant treatment.

The studies objective was to evaluate how long the crop could be deficient and fully recover. There was no relation between when the crop became deficient and when the crop could no longer recover. Yield as maintained as long as the N was applied by late March, or just before the flag leaf is visible (Feekes 8), grain yield was the same as if applied on the first day of deficiency. However, if the N was delayed to March protein was increased six out of the eleven locations.

A mirror study to the Delayed Nitrogen – NH4NO3 was established in the fall of 2018 and concluded with the 2020 harvest. This study was placed next to the NH4NO3 and treatments applied on the same days using the same rate (90 lbs N ac-1) applied as urea to evaluate efficiency of urea applications over a range of dates.
Three of the four locations produced a positive response to N fertilizer and documented similar results as the NH4NO3 project. Across these three sites in-season N was always equal to the pre-plant rate if applied before the flag leaf is visible. In addition, if the urea was applied just after hollow stem, not only was yield maintained but protein was significantly increased compared to both the pre-plant and 0DAVD treatments at all three responsive sites.

This study looked at multiple rates and times of N application but for this factsheet we will focus on a small set of treatments. Performed over two years and four total sites this project looked at split application of N versus a one-time application, 45/45 split or 90 lbs of N. Application timing was 0, 30, 60, 90, 120 growing days (GDD>0), trying to have applications at planting in December, February, March and April. In three of the four sites the 90 day application produced the greatest yield and protein for both 45/45 and 90 treatments. In this study the one-time application of 90 lbs N ac-1 out yielded the 45/45 split in two of the four years and was equal the other two. The 90 day application of 90 lbs N ac-1  produced a higher protein concentration at all sites compared to the 45/45 split applied on the same date.

This study evaluated four rates of N (0, 40, 80, 120 lbs N) applied at three times (30 days pre-plant, pre-plant, and Feekes 5) using urea. Feekes 5 is the growth stage prior to hollow stem when the wheats leaf sheaths are becoming strongly erect. This project was completed over two locations for two years, however of the four site/years only three statistically responded to N fertilizer. In those three responsive trials the Feekes 5 application grain yield was equal to pre-plant once, greater than pre-plant once, and less than pre-plant once. The grain protein was only statistically different between the pre-plant and Feekes 5 once, with an increase in protein with late N. The one location with yield loss can be likely attributed to N loss from urea volatilization. The urea was applied on no-till immediately after a heavy rainfall with no substantial precipitation occurring for a week after application.

This factsheet summarizes four separate research projects which can contribute data from 24 trials to evaluate the application of in-season N compared to pre-plant N, see Table 1. Of these 24 site/years we can draw conclusions from the 22 that responded to N fertilizer applications. Across these trials applying all N pre-plant resulted in the highest grain yield once, applying all N in-season near or after hollow stem resulted in an increase in grain yield above that of the pre-plant seven times. However, the delaying of N application until hollow stem resulted in a significant increase in grain protein concentration at 18 of the 22 trials.

These results are significant for the winter wheat growers of the southern Great Plains as this research documented not only the ability but the necessity to move away from pre-plant and fall N applications for winter wheat grain production. The window for N application is likely much greater than most wheat producers would have considered. This work showed that not only could N be delayed and yield not sacrificed but, when delayed; yield will be maintained and protein concentration increased.

The final conclusion is that the timing of N application should not be based upon the presence of N deficiency or calendar date. Rather the timing should be based upon the weather and enviroment during application. While many of the projects used NH4NO3 as the N source to limit the impact of N loss via volatilization, the primary source for in-season nitrogen in the region are dry urea and urea ammonium nitrate (UAN) solution. Both of these sources have well documented loss due volatilization. The location from the Nitrogen Rate by Time trial which Feekes 5 applications were statisically below the pre-plant application supports this. This data set provides signifiant evidence that the optimum application window is quite wide and allowing producers more flexiabltiy to avoid those environments which will likely lead to N losses. 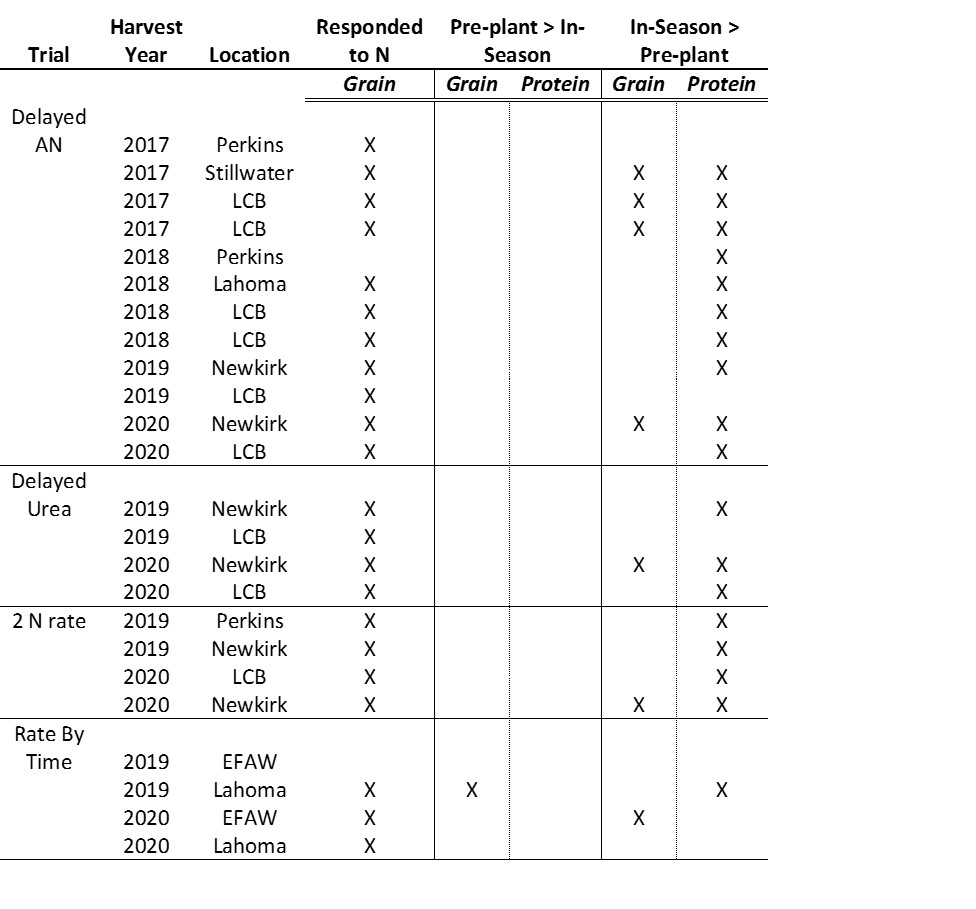 Table 1: Summary of all trial locations and years. The X represents statistical significance, alpha = 0.05. In-season application represents all treatments applied at least 30 growing degree days after planting. Majority of the treatments in the studies were applied after spring green up.

Like Loading...
By osunpk in Fertilizer, General, Nitrogen, Wheat on September 10, 2020.
← Yellow Wheat the 2020 Edition. Nitrogen timing in a winter wheat forage system →