Since 2008 I have served as the Precision Nutrient Management Extension Specialist for Oklahoma State University. I work in Wheat, Corn, Sorghum, Cotton, Soybean, Canola, Sweet Sorghum, Sesame, Pasture/Hay. My work focuses on providing information and tools to producers that will lead to improved nutrient management practices and increased profitability of Oklahoma production agriculture

Precipitation in the southern Great Plains is never something you take for granted. As I write this blog I am just wondering when it will be dry enough for long enough to finishing sowing my wheat, but I also remember just how dry it was last winter. The last three months, Aug-Oct rank as one of wettest in the states recorded history. Below are the 30, 60, and 90 day rain fall totals (as of 10.26.18) from Mesonet. By the 60 day map most the wheat belt is showing double digits and the 90 day maps shows a lot of our graze out wheat regions in the 20+ inch realm. 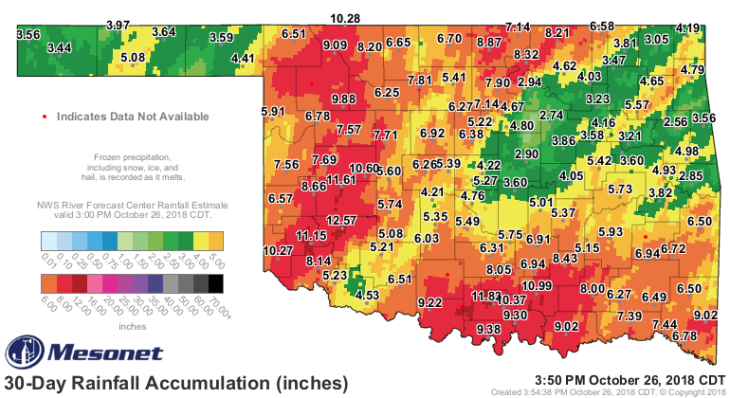 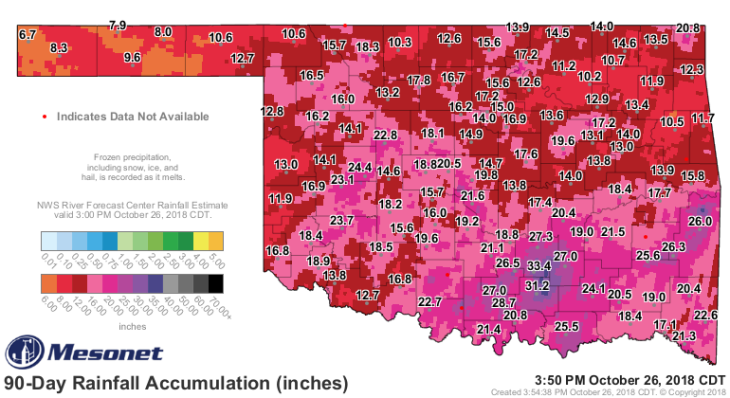 I bring up graze-out wheat for a reason, to get as much forage as possible it is planted as early as possible. I know of fields that were seeded in July and early August. And to produce this great quality forage, nitrogen fertilizer is applied pre-plant. It just so happens that this July more fertilizer was sold than any other month since I have been in Extension. In July producers bought nearly 1/3 of totoal tons of fertilizer what is typically sold in a single year. While a portion of this may have been pre-purchased for later delivery, I know a lot of it made it to the field. To see why this matters, lets take a look at the nitrogen cycle. 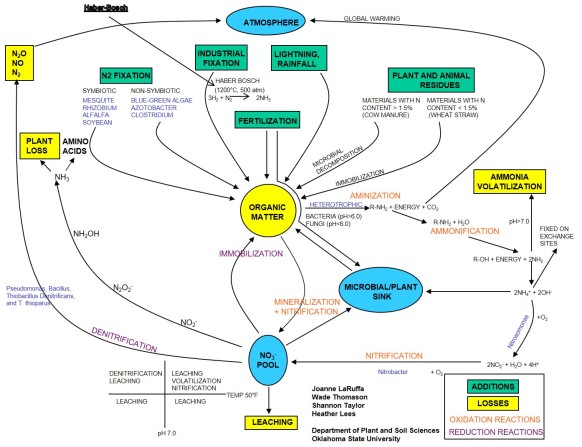 The nitrogen cycle is made up of a central component (Organic Matter), three N sinks (Microbial/Plant, Atmosphere, Nitrate {NO3}), four loss pathway (Ammonia Volatilization, Leaching, Plant Loss, Denitrification), and five additions (N2 Fixation, Fertilization, Lightning/Rainfall, Industrial Fixation, Plant/Animal Residues). We are going to spend the next bit talking about what is happening in the bottom right corner and left hand side.

When we put anhydrous ammonia (NH3) in the soil it pulls a hydrogen (H) from water and turns in to ammonium (NH4). Urea goes through a similar process but has to first be converted to NH3 by the enzyme urease.  Ammonium is important because it is a positively charged ion (cation) which will be fixed on the cation exchange sites. This means is it not going to move around in soil, but is readily available for plant uptake. However when NH4 is in a soil with temperatures above 50 degrees and in the presence of oxygen the two bacteria nitrosomonas and nitrobacter convert it to NO3. Given warm soils and our good soil moisture levels it very likely that any N applied in July or August would have converted 50% or more of its NH4 into the NO3 form by this point. 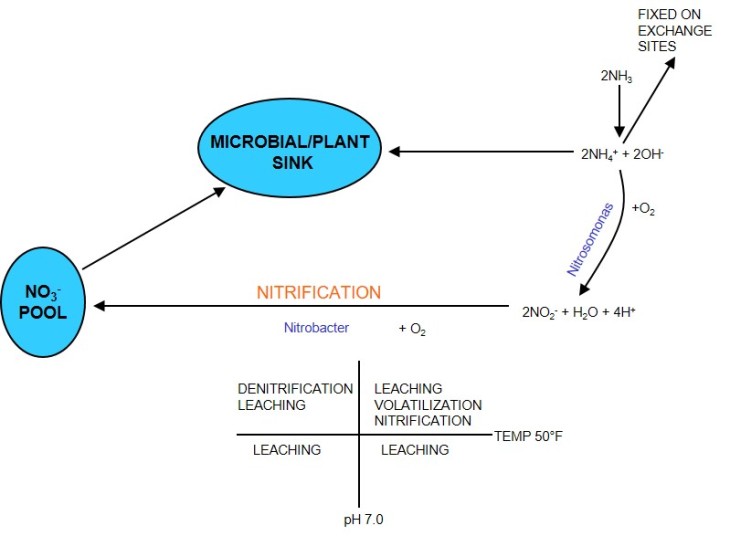 Nitrate is a negatively charged ion (anion) which is repelled from the negatively charged soil. This is beneficial for plants as when they take up water, NO3 is taken up though mass flow. The downside is that since NO3 is in the soil solution, where ever the solution goes so does the NO3, that is called leaching. So in well drained soils the recent rains will have caused a fair amount of leaching.  For some areas the NO3 that is leached below the root zone and could potentially be drawn back up as the soils dry. But there are going to more scenarios in which the N is gone, or at least gone elsewhere. In a sloping field the soil water will hit a limiting layer or clay increase layer and move down slope. I have already seen many wheat fields that are showing yellowing on side slopes.

Unfortunately leaching isn’t the only way we are losing N during this wet cycle. Denitrification occurs when the soil is saturated and oxygen (O) levels are depleted.  In anaerobic conditions, microbes strip O from NO3 reducing it gaseous forms. Typically it takes about one week of standing water to start seeing high levels of denitrification. 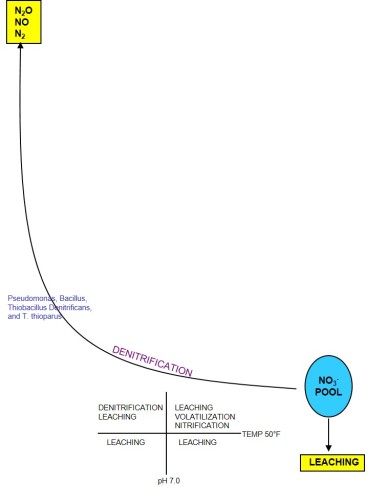 What does this all mean? Conservative guess is that for July or early August applied N we could be looking at losses of 50% or more.  This is a rough guesstimate of course, a fields soil texture, slope, soil type, tillage etc will all impact the loss amount.  As the date of application moves closer to Oct there will have been less nitrification and less total rainfall. What I can say with 100% certainty is that if N fertilizer was applied any time from July through early September, N has been lost.

So whats my N manage recommendations? First, foremost, and always This is the perfect scenario where N-Rich Strips will pay off! (Here’s a blog on N-Rich Strips https://osunpk.com/2013/09/19/nitrogen-rich-strips/). The N-rich Strip will allow you to detect N stress early, which for grazers is important. Close attention needs to be paid on fields with wheat being grown for grazing, N deficiencies will reduce forage production and gain. If the N-Rich strip shows up or there are signs of N deficiencies (yellowing of older leaves from the tip toward the collar) its time to be looking at applying N. For grain only fields we have some time. It is important though that as we get closer to spring and hollow stem we are taking care of the crops N needs. Here is a link to a blog on reading the N-Rich Strips to get a N rate rec https://osunpk.com/2014/02/24/sensing-the-n-rich-strip-and-using-the-sbnrc/ and here is a link to one of my latest blogs on Timing of Nitrogen Application for Wheat https://osunpk.com/2018/10/01/how-long-can-wheat-wait-for-nitrogen/.

Below is a Sunup TV video on the subject of Nitrogen Losses with the recent rains.

Its that time of year and I wanted to share my thoughts on nitrogen (N) management in the up and coming winter wheat crop. This season is already shaping up to present certain challenges and opportunities. This blog will highlight many of the topics that were brought up in a recent Sunup TV shoot, video below.

This summer the price of Anhydrous Ammonia (NH3) dropped and producers made a run on NH3 for graze out and dual purpose ground. Currently the price of N is still lower than it has been than it has been in a while and producers are are taking advantage.  All things are lining up for this fall to be a good forage year, nitrogen prices are low and we are going into September with a decent soil moisture profile across the wheat belt.  If producers can get into the field in a timely manner and we keep getting timely rains it will make a great forage crop.  But here is my cautionary statement, if this is a good forage year we are shaping up to be short on N by spring. First the market place over the past two years has overall reduced the amount of inputs into the wheat crops and I would say across the  board a lot of the wheat ground is starting out this season with very little residual N.  Secondly and more importantly everything which makes for a good forage year makes for a good N loss year, for Oklahoma good rain usually makes good forage. While NH3 does immediately convert to the non mobile ammonium (NH4) form, when soils are warm and moist it does not take long to convert to the mobile and leachable nitrate (NO3) of N. In a recent study looking at N applied at planting in corn, the majority of the NH4 had converted to NO3 by V4, which is usually four to five weeks after planting. Which means NH3 applied in August is likely completely converted to NO3 by September and susceptible to leaching (Since starting this blog in August we have seen a dry down, note the soil moisture on 9.7.17, and abundance of army worms).  As the story line has been the low protein wheat of the 2016 and 2017 harvest attention needs to be paid to the crop going into spring. 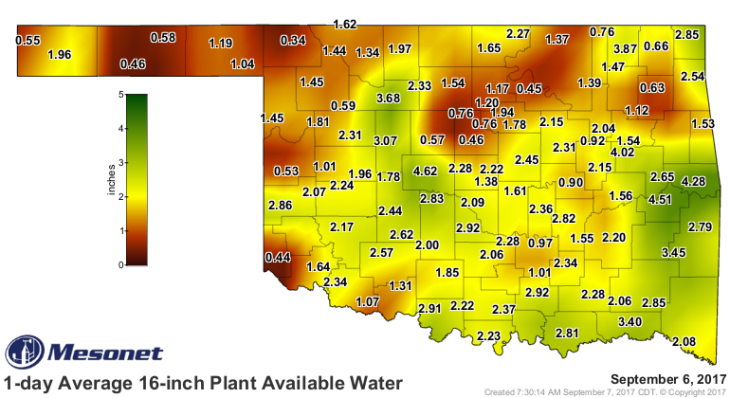 At Minimum MASS BALANCE the system for dual purpose.
The most simplistic approach to nitrogen management this year is the evaluate what has been made for beef gain and what will be needed for wheat grain yield come the spring. The general rule of thumb is that is takes 1000 lbs of forage to produce 100 lbs of beef gain and depending on the N concentration 1000 lbs of wheat forage will have about 20 lbs N tied up in it. As I talk about on a regular basis, nitrogen use efficiency is not 100% so OSUs rec is 30 lbs of N for each 100 lbs of gain/ 60 lbs of N per ton of forage.  On the grain side the standard rule of thumb is 2 lbs of N per bushel. So if the producer applied 100 lbs of NH3 (82 lbs of N) pre-plant and in the spring the average gain is 200 lbs per acre there is only 22 lbs left over for the grain.  At that point if we use the field historic average grain yield, lets assume 30 bushel, there needs to be about 38 lbs of N added.
22 lbs (left from pre) / 2 = 11 bushels. 30 – 11 = 19. 2 lbs N per bushel * 19 bushel = 38 lbs of N.

Grain Only Systems
More and more of the grain only producers I am working with are using a 3 pass fertility approach. The approach works this way, No pre-plant N is applied except for what goes down with the seed.  In all scenarios this is 40-80 lbs of 18-46-0 which delivers 7 to 14 lbs of N above what is already in the soil (residual N). The second pass comes in winter to early spring before green-up where they are typically applying about 60+ lbs of N.  The third pass happens prior to hollow stem.  At this point the producers are taking stock of their crop.  If the stand is good and soil moisture is good the final application tops them off for the rest of the season.  This system is really aided by the application of an N-Rich strip https://osunpk.com/2013/09/19/nitrogen-rich-strips/  . The strip allows the producers to observe the system and know exactly when nitrogen is limited and applications need to be made. Utilizing the Sensor Based Nitrogen Rate Calculator https://osunpk.com/2014/02/24/sensing-the-n-rich-strip-and-using-the-sbnrc/  provides an exact value to the nitrogen needed.
The approach of putting on nitrogen in-season will not only increase the efficiency of the N applied but will help in producing a wheat crop with a good final protein value.

For those wanting to go with the more traditional N application approach of 2 passes I prefer to have no more than 50% of the planned N down at pre-plant. This will allow for a spring green up based upon yield goal.  If using the N-Rich strip in a two pass approach I like to see about 30-40 lbs down at pre-plant and then use the N-Rich Strip and SBNRC to fine tune your top-dress which will take place in the spring. Using this technique the research from OSU shows the we can both maximize yield and nitrogen use efficiency.

For the Full Story watch the Sunup TV YouTube video below.

N-Rich Strip Applicator. Push Spreader that can be purchased at any local hardware store.