From trials to phone calls (and text messages, and tweets, and ect. ect) I have gathered a fairly good picture of this years winter wheat nitrogen story.  And as normal, nothing was normal.  Overall I seen/heard three distinct trends 1) Did not take much to make a lot 2) took a ton to make a lot 3) saw a response (N-rich strip or cow-pow) but fertilizer never kicked in. Covers most of the options, doesn’t it. 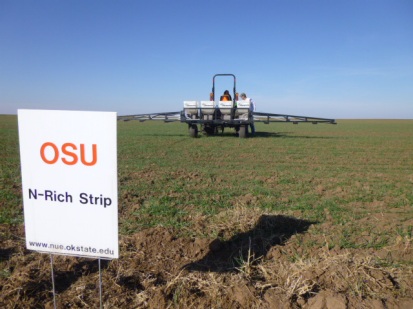 The N-rich strips really came out over all very good this year.  N-Rich Strip Blog. On average many of those using the N-Rich Strip and SBNRC (SBNRC Blog) producers have been getting in the neighborhood of 1.0-1.3 lbs of N applied per bushel produced.  This year the numbers ran from 0.66 to 2.3 lbs of N per bushel.  In both extremes I believe it can be explained via the field history and the N-Cycle.

In at least two fields, documented with calibrated yield monitors, the N-Rich Strip and SBNRC lead to massive yields on limited N. One quarter of IBA bumped 86 bpa average on 47 lbs of N while a second quarter, also IBA, managed 94 bpa average on about 52 units of N. We are currently running grain samples from these fields to look protein levels.

The other side of the boat were those with N-Rich strip calling for +2.0 lbs N per bushel.  I had received notes from producers without N-rich strips saying that they could predict yield based on the amount of N applied and it was a 2 to 1 ratio.  Not always but many of these high N demand fields where wheat following a summer or double crop or corn or sorghum. While many of the low N demand fields were wheat after wheat or wheat after canola. In a rotational study that had been first implemented in the 2014-15 crop year I saw big differences due to previous crop.  The picture below was taken in early March.  The straw residue in wheat after wheat had just sucked up the nitrogen.  While it was evident the residue from the canola broke down at a much more rapid pace releasing any and all residual nutrients early.

The yield differences were striking. The canola rotation benefited the un-fertilized plots by 22 bpa and even with 90 lbs of N applied having canola in the rotation increased yields by 12 bpa.  We are looking and grain quality and residual soil sample now. I am sure there will be a more indepth blog to follow.

Another BIG story from the 2015-16 wheat crop was the lack of benefit from any N applied pre-plant. It really took top-dress N this year to make a crop.  Due to our wet early fall and prolong cold winter N applied pre was either lost or tied up late.  Work by Dr. Ruans Soil Fertility Program really documented the lack luster pre-plant N effect. The figure below shows 4 location of a rate by timing student.  The number at the bottom of each graph is a rate by time (30/0 means 30 lbs Pre-0 lbs Top, 60/30 means 60 lbs Pre-30 lbs Top).  At every single location 0/60 beat 60/0. Top-dress N was better than Pre-plant N. 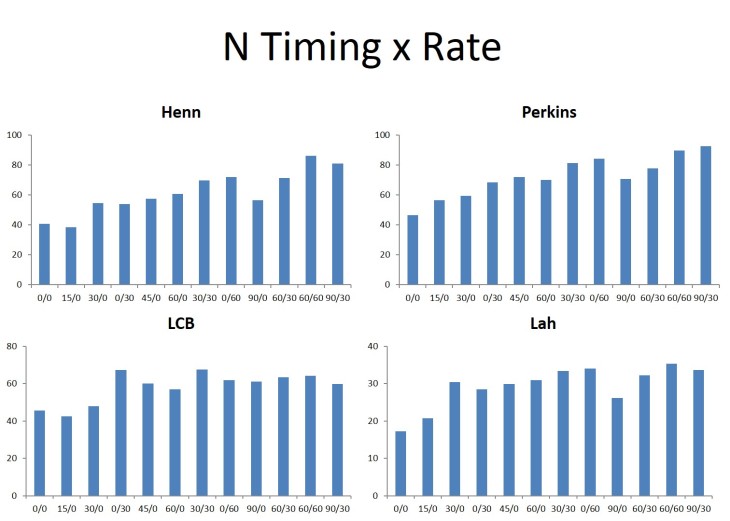 The last observation was lack of response from applied N even though the crop was deficient.  Seen this in both the NE and NW corners.  I would hazard with most of the circumstance it was due to a tie up of applied N by the previous crops residue.  The length at which the winter stretched into spring residue break down was also delayed.

Here it is folks APPLY NITROGEN RICH STRIPS.  Just do it, 18 years of research preformed in Oklahoma on winter wheat says it works. Hold off on heavy pre-plant N even if anhydrous is cheap.  It does matter how cheap it is if it doesn’t make it to the crop.  Will we see another year like 2015-16, do not know and not willing to place money on either side. What we do know is in Oklahoma split applying nitrogen allows you to take weather into account and the N-Rich strip pays dividends.

There are several fact sheets available on top-dressing N and the application of N-Rich strips.  Contact your local Oklahoma Cooperative Extension Service county educator to get a copy and see if they have a GreenSeeker sensor on hand.