When drilling canola a common strategy to improve seeding rate accuracy is to only use every other row which effectively doubles the rate of seed going through each meter.  There are also many producers who utilize air seeders and just prefer the wider spacing.  Every season I get several questions about determining total fertilizer rates if the seed is dropped every other row but fertilizer is dropped every row. Regardless of whether or not fertilizer goes down every row it is important that the amount of salts placed with seed does not exceed the limit.  The table below provide the limits in terms of lbs of salt per acre.  If using 18-46-0 (DAP) or 11-52-0 (MAP) this is equivalent to pounds of N per acre. However if the fertilizer you use contains potassium (K) or sulfur (S), those have to be considered. An easy rule of thumb for determining total salt level of a fertilizer is pounds of N + K + 1/2 S.

Maximum amount of salt that can be applied in furrow with canola seed. Application rate should be at or below this value.

In a scenario in which canola is seeded in skip rows but every row will get fertilizer the total amount of fertilizer can be doubled.  For example on a 15″ row spacing the max salt rate is 5 lbs per acre. If you were using DAP as your starter that maximum rate to place in furrow would be 28 lbs of DAP per acre.  If using a drill set of 7.5″ spacing and putting fertilizer down every row the max rate would increase up to 56 lbs DAP per acre.

Some producers may have the capability of applying different rate in every other row.  In this scenario it is important to maintain that safe rate in the seed furrow. In the opposite row, fertilizer rate can go as high as you wish or the equipment can handle.

Now the big question is, “Is between row fertilization a good idea?” While we do not have results on this style of application (trials will be going out this year)  we can draw upon upon similar work in other crops. For me the best win would be the second scenario in which a higher rate could be place between the rows.  In this row I would use a urea and DAP blend.  Any time we can put urea below the soil surface its a win and in fields with very soil soil test phosphorus (P) it would create something similar to the deep P bands  once popular in corn production. Now if the field had adequate soil test P, I would focus on urea between rows. Keep in mind it is never a good to place urea in furrow with canola seed. For the average producer who is using a box drill the first scenario is the only option.  In this case the rate of the between row bands will be reduced however I still believe on fields with very low soil test P this is potentially a great way to get the rest of it on. Remember if on 15″ and using DAP max rate only gets 12.9 lbs of P2O5 down.  If fertilizer is dropped down every tube that number increases to about 26 lbs P2O5, which is still not enough for fields with low soil test P, but is better.  With hope we will have some good results to share from the 2015-2016 canola crop. 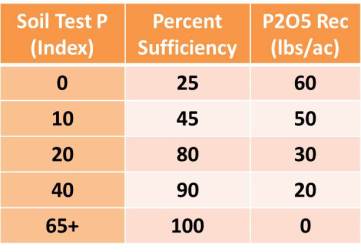