It was just 11 months ago when I wrote my last blog on Ag apps.  Since that time I have presented on the topic several times, added nearly 100 new apps, have filmed several designated segment on sunup featuring apps (these can be seen at http://www.youtube.com/osunpk), and released two (soon to be three) apps myself.  Below is the introductory slide I have been using in all of my app talks, on this slide you can see how the number of apps have been increasing overtime. In this update I wanted to share some of the new sections I have added to manage the vast number apps and go through some of my favorite apps in each of the sections.

Finding the right app has not changed as I still just give an app 3 minutes before a keep or drop decision is made, however since a year ago some of the key words are now less useful.  For example a search for wheat will bring up droves of gluten free diet apps.  None of these fit the bill for what I am looking for. Though out the blog you can click on pictures screenshots to get a better view of the app buttons.

Still a very large section with little change for my recommendations, just go with what suits you in layout and reporting.  I personally use RonOnRON (Ron Hays, the voice of Oklahoma Agriculture), DTN/PF, AG/Web, and AgWired.

The majority of the Calculator apps preform relatively simple functions without the need of cellular or wifi connectivity. The Ag PhDs have two apps in the section I want to highlight, HarvestLoss and Fert. Removal. Both apps are useful tools in making management decisions. HarvestLoss allows the user to calculate the economic loss of a poorly set combine while Fert. Removal allows the user to select from a wide range of crops and see an exit ate of nutrient removal based upon selected yield level. Other useful apps are Growing Degree which allows the user to see cumulative heat units a crop has received anywhere in the US, Corn Yield Calc estimates corn yield based on ear girth and length, Canola Calc is a great apps produced by Pioneer which calculates the proper planting rate of canola based upon several factors and the Kansas Wheat Yield Calculator KWYC, uses growth stage stalk counts, height and/or NDVI to estimate potential grain yield. 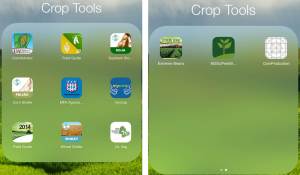 This section is filled with University Extension handbooks such as Purdue’s Field Guide ($12.99), University of Arkansas Corn Advisor, University of Kentucky Corn Production, and one private groups MFA Agronomy. Each of these guides are quality apps and should be chosen based upon geography or personal preference. The university apps mirror their respective hard copies however UK’s app added a nice update section highlighting local Ag news. MFA’s app is strong in pesticides with good herbicide performance data.

For any producer who regularly applies animal waste the Manure Calc by the University of Nebraska is a great tool. The University of Wisconsin has a nice app in N Price Calculator and the Saskatchewan Soil Conservation association (SSCA) has created a nice fertilizer blend app. Oklahoma State University has Ammonia Loss Calculator which uses soil pH and environmental conditions to estimate N losses from surface applied urea.

I am also getting into the app game with two recently released apps the Canola Starter and Field Guide. Canola Starter provides a recommendation for safe starter rates based on row width and fertilizer source. Field Guide is app version of my Nutrient Management Field Guide, this app includes a nutrient removal calculator, nutrient deficiency ID tool, and fertilizer rate calculators. Along with these I have several in the wings with titles like Crop Nutrients in Irrigation, GDDs>0, and Wildlife FoodPlot.

As mentioned in my first two blogs the University of Missouri’s IDWeeds app was the first taxonomy based weed identification tool. I still use it regularly but both BASF and Monsanto have brought products to the table, both named WeedID, that are very user friendly and effective. Plant Images ($5.00) is a library of nutrient deficiency photos from a large selection of crops. Years and Ag PhDs also have apps available with deficiency images named Yara Checkit and Crop Nutrient Deficiencies. Cereal Disease ID app by BASF is intended for the UK and DuPonts Pestbook for Australian cotton farmers but I find that both can be very useful even in Oklahoma.

I have heard several good things about many of these apps.  However they reguire the user to either be an employee or patron of the company or online registration. In a pay to pay app I would expect an all inclusive tool that could replace several free apps and preform record keeping duties.

To be honest this is not a section I use much as I do not have an operation to maintain records on. However just by walking through the apps Crop Calculator by the University of Wisconsin and Pesticide Recordkeeping (PeRK) by University of Nebraska.

This section has apps that I classify as decision aid tools that could be used by someone scouting crops and apps that can be used to map and or collect field notes. South Dakota State has two great tools in Soy Diseases and NPIPM Soybean Guide.    Scout and Sirrus.

Company based, Pioneers app products are some of the best with Plantability and Estimator

Some things haven’t changed I still use Tank Mix Calc and Spray Select on a very regular basis. But over the past year a few companies have added product finders and Clemson University has released a very nice sprayer calibration app named Calibrate.

The last two apps are Mesonet and Climate Corp Basic. You will notice the background on the screen shot is slightly different. That is because neither of these apps is kept Ina folder, both are on my home screen. Whether it is rain, temp, or wind weather impacts all aspects of agriculture therefore these two apps are always within one tap. For any producer in Oklahoma the Mesonet is an amazing system with 120 automated weather stations spread evenly across the state. This app just provides this data with just a few swipes of the finger. For those outside of Ok Climate Basic allows producers to first save field of interest and then monitor rainfall and environmental conditions of each field. While not extremely accurate it is defiantly close enough for those with a wide territory to be a very handy app.
For more information and some screen shots of the apps in action either visit my website http://npk.okstate.edu/presentations or my YouTube site http://www.youtube.com/osunpk under the playlist OSU_NPK on Sunup.